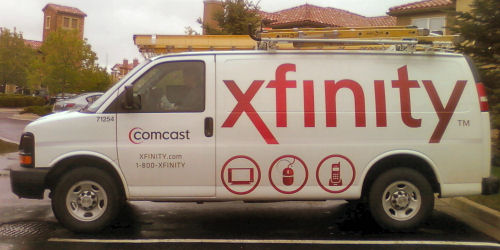 There’s a new evil lurking in our neighborhoods. Thousands of counterfeit Xfidgity and Comcrust trucks have been spotted across the nation. To the casual observer, these trucks have all the appearances of the real thing. But on close inspection, “Xfidgity” is mispelled and in a different font than the bonafide Xfidgity logo. In the case of Comcrust, the blue graphic device encircling the “C” in Comcrust is red, not blue.

Police have been notified, and have asked concerned citizens to post their sightings and phonecam images to this blog so the perpetrators of this fraud can be quickly and harshly dealt with.

This entry was posted in Crime and Punishment. Bookmark the permalink.